So I've run into some free time having now finished some work on our home, and wanted to take a stab at the 11 Second Club competition for this month. I'll post it here once the voting for the competition is over. I don't know if there would be any issues if people associated this entry with me before voting. So check back in early January to see it.

I decided to try out the Morpheus Rig (Morphy) by Josh Burton. It took me a little while to figure out all the ins and outs of it, but it seems to be pretty robust, and by far the best free rig I've found online for doing animation exercises with. You should definitely check it out if you get the chance. AND... watch the videos about the rig too before you get going!!! It'll save you a lot of time and frustration.

It felt really good to try and get back into acting with a character. That's something that I've been really missing in my hustle and bustle of game animation. Anyway, check back in a bit to see the update. Should come online sometime after the 4th or so... I think voting takes the first 3 days of the following month.

I'm so excited about P2 finally being announced, as its the first title I've worked on to do so. Therefore, I'm going to keep updating this post with fun new goodies once they've been posted elsewhere on the web. I won't talk about, confirm or deny any questions asked about the game, nor does my posting them here constitute an affirmation in any way. So don't bother to ask any questions about it. I just wanted to collect the pretty bits of marketing that come about as a way to preserve it for posterity.

Some nominations and ruminations on the upcoming release of Prey 2:
#8 on the top 25 most anticipated games of 2012
Another 'Most Wanted of 2012'
And another 'Most Wanted'
And it was nominated for 'Best Trailer' on the Spike VGA Awards show.

It's fun to see people so excited about your work.


So, Bethesda just published some pixel art I did for fun on their Facebook site. Pretty neat!


Here's a link to our CG Teaser Trailer... It's really slick! 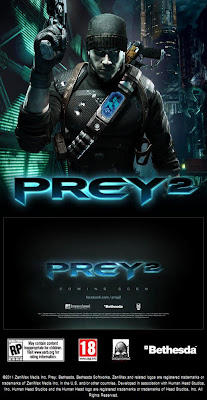 And courtesy of G4's Site: 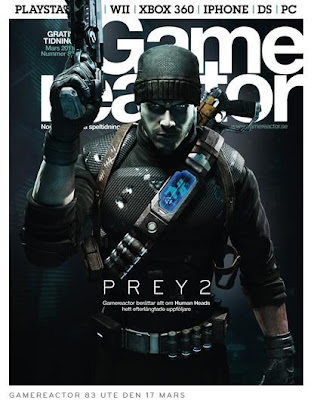 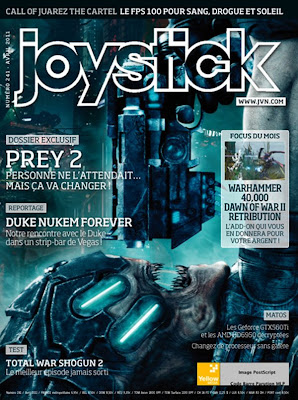 Here's a link to the official announcement from Bethesda.
This is what we've been working on as of late. Its really exciting to actually be able to name the project we've been pouring so much effort into. So, keep a lookout, there's going to be good stuff coming!

Sequel to Award-Winning Prey to be Available in 2012

March 14, 2011 (Rockville, MD) — Bethesda Softworks®, a ZeniMax® Media company, today announced that Prey® 2, the sequel to the popular 2006 game, is scheduled for release in 2012 and will be available for Xbox 360® video game and entertainment system from Microsoft, PlayStation®3 computer entertainment system, and Games for Windows. Further details onthe game will be revealed in the May issues of Official Xbox Magazine and PlayStation: The Official Magazine, as well as in magazines throughout Europe.

Prey 2 is being developed by Human Head Studios, the studio that created Prey, the original, award-winning game. Prey 2 is being built on the cutting edge id tech engine from id Software.

"We are thrilled to be working with Bethesda on Prey 2," said Chris Rhinehart, project lead. "Prey 2 will provide gamers the opportunity to explore a new facet of the Prey universe, one that offers fast-paced action in an open, alien world. We're excited to show gamers the title we have been working on and hope they will be as excited by this title as we are."

Continue to check http://facebook.com/prey2 for additional information on Prey 2 in the coming days.

I know its been a while, but all has not been forgotten. Life has just been nuts lately. But, some progress has been made with the "softIK" solution for Maya. I came across a website from a couple years back (which makes me feel really dated) that had this ability functioning. Sadly, it was in Japanese, so all I could actually glean was the example file they sent. So my next plans are to go through the code and try to find a good way to clearly explain how the joints are being driven, and try to generate a script to automate the process. After all, that's what MEL is good for. Hopefully that update will come sooner rather than later.

In the meantime, here's a link to the site I'm basing this off of. You can download the file there as well.

Hey, I just had an ingenious idea... So, I went to the XSIBlog site (link below) and downloaded his plugin for XSI to see if I could make any sense out of it. Looks like it was written in JScript. So you should be able to open it up in a decent text editor and begin to thumb your way through it. Though I'm not familiar with JScript myself, I'm sure I can talk to some programmers at work about it and they can shed some light on the topic. More to come, but in the meantime feel free to download the plugin and see if you can make any sense out of it. It'd be a good excercise... Here's a link to the download.

So, I've been hearing a lot about 'Soft IK' lately and have decided to try and give a solution a go. The general idea behind it is to give the functionality of the IK Chain this behavior:

(Pic from http://www.xsi-blog.com/archives/108)
More specifically, the behavior of the bottom chain. I'm going to base it on some of the solutions presented in Jason Schleifer's Animation Friendly Rigging DVD set. I definitely recommend the DVD set if you can swing it.

If you all aren't familiar with Jason, he's an immense resource and aid to the community. I actually emailed him to get some direction with this, and he responded, at good length, within an hour. Actually 5 min for my first email.

This post will chronicle my progress with this. Though, be warned, it may take a while as I'm working to refinish our attic at home and we're expecting our first little one in Sept. So please be patient, hopefully I'll get something underway soon. 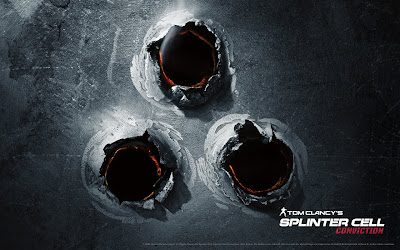 I've been doing some research into upcoming games recently to check out any new approaches to animation pipelines and conceptual ideas. I began looking into the next installment of the Splinter Cell series: Conviction. In it, they talk about a new gameplay mechanic called 'marking.' The premise is that Sam Fisher can survey enemies and environmental elements while concealed in the shadows, and when he springs into action, the game begins to take over, and execute the targets in the order you specify. This allows the user to get the drop on enemies in a planned, orderly fashion, that helps you to feel powerful and in control, instead of like a lame duck as some of the older Splinter Cell games did.

Aside from this being a fun gameplay mechanic, I think its pretty interesting from an animation standpoint as well. Instead of the player controlling all the action, and the game having to interpolate and interpret these inputs on the fly, sometimes resulting in hideous animation, it can specify a single animation or a series of cycles that are planned to run together, resulting in a highly polished, smooth, visceral result. I'm looking forward to being able to try it out. If it works as smoothly as some of the videos show, it could really be a nice improvement to the franchise and gaming as a whole.
Posted by Sean at 13:25 No comments: 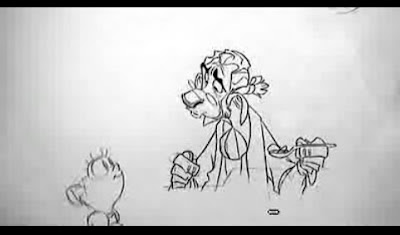 I found this site linked to from Josh Burton's blog today. There are some absolutely beautiful pieces of animation displayed here. It is definitely worth a look if you have any interest in animation whatsoever.

On a side note, I always find pencil tests so beautiful. They seem to have so much more emotion and action than the final cleaned up stuff.

Cloudy With a Chance of Meatballs 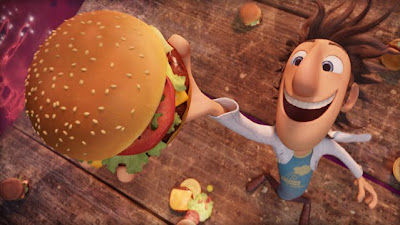 Is coming out on the 18th. Spread the word, it looks like its going to be a lot of fun. At least, I'm looking forward to it.
Posted by Sean at 11:13 No comments:

I just read an interesting entry from Keith Lango's blog. It's dealing with the 'controversy' that arose surrounding the movie Avatar, which is being directed by James Cameron. Someone on the production said,
"Our goal on this movie was not to replace the actor, it was to replace the animator. If you think about it, what a great actor does and what a great animator does are antithetical to one another. "A great actor withholds information. Dustin Hoffman in All the President's Men can sit there and do nothing. No animator would ever allow that, they would put in a twitch. So our objective was to preserve Sam Worthington's performance and have that be what you see in those characters."

Keith Lango had an interesting take on it saying, "I eagerly await the day when mo-cap technology gets so good that animators won't be stuck wiping the poo from the data or twiddling the performance because the director can't keep his hands off it and trust his actors." Which is completely contrary to the initial response many animators are having. (Reminds me a lot of some comments made before Polar Express came out.) He goes on to further emphasize the difference between the intent and purposes of live action (mo-cap) and animation. Its an interesting view, and some points he makes I've never really considered myself. Though, I think I must agree with him. Actors and animators each have their role. I highly encourage the read.

This still plays out a little differently in the gaming industry I think. Here, we're focused more on motion and believability than performance, unless we're animating through a cut scene. I think animators will always be needed to push actions further and tweak things to make the inhumanly possible, which is why games are fun anyway. Take Drake's Fortune as an example. They used mocap, but adjusted the timing and poses to push things further and create the experience they were looking for. Besides that, some things simply can not be captured by a person in a suit. That is where animation, and animators, will always be a necessity.
Posted by Sean at 10:22 No comments: 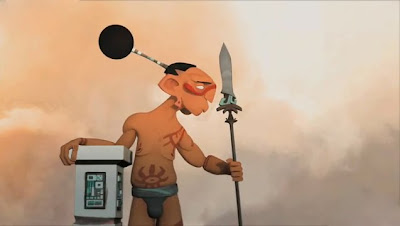 And while poking around Gobelins' site, I found this short. It epitomizes the idea that a great short can come from the simplest idea, executed masterfully. Check it out.
Inka Bola
Posted by Sean at 14:40 No comments: